Government shutdown: What can break the impasse in Washington 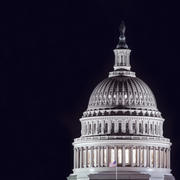 The United States federal government shut down this weekend, as Congress couldn’t pass a short-term spending plan. Both Republicans and Democrats dug in their heels and blamed each other for the impasse.

There was some optimism Sunday that a bipartisan group of moderate Senators could reach an agreement to reopen federal agencies Monday morning. But late Sunday the Senate adjourned without a deal to end the shutdown, and a new vote was postponed until Monday at noon.